Last night I went with a friend to see the excellent movie The Imitation Game. The movie is a biopic of Alan Turing who helped crack the Enigma code during World War 2 and who was also one of the inventors of modern computer techniques. The movie was about how the German Enigma machines had their code cracked. Alan invented a computer known as the Bombe that he and his team used to crack the code. This was the first time that a computer was used in a war and it helped the Allies win World War 2. 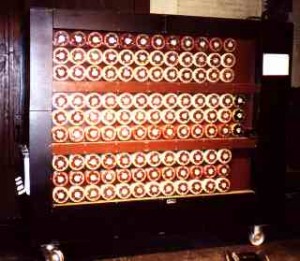 The Bombe was a primitive computer compared to what we are used to today and it got me thinking about how much we rely on computers. Our everyday lives are controlled by computers and even though we may not realise it, the majority of us carry around one in our pockets and it is the smartphone. Smartphones are miniaturised computers and have much more processing power than the Bombe.

Alan Turing realised the importance of computers and the role they could play in our lives. The Turing Test which Alan Turing devised to see if a machine can exhibit behaviour that makes it hard to distinguish if it is human or not, and is the earliest form of AI (Artificial Intelligence). The modern version of the Turing Test is the Captcha which you see on most websites. The Captcha is a random created phrase or number which when displayed you enter to prove you are human and it is used to help prevent spam and hacking.

All modern computer theory owes its debt to Alan Turing and he was right when he realised how much we will rely on computers. When Alan Turing used a computer to help win World War 2 he envisaged it being used for good. Since then computers roles have changed and as we are forced to rely on them more we have to have security policies and systems in place to protect them.

At the moment we are in the midst of the cyber wars as computers are attacked to steal their data, cause disruption to infrastructure and to also control our access to up to the minute news via social media and media apps. The Regin virus has shown us that any computer can be used to help spy on people and countries as well as steal their data. If we can’t lessen our reliance on computers we have to ensure that they can’t be compromised. We are now in the age of the modern imitation game.