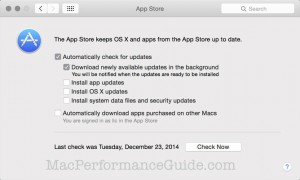 Over the Christmas period Apple Mac owners will have noticed that they have received an automatic security update, which did not require user approval or your Mac to restart. The automated security update was released after the US Department of Homeland Security and the Carnegie Mellon University Software Engineering Institute last week warned about a security bug that affects OS X, Linux and Unix systems.

Revealed were vulnerabilities that allowed a computer’s network time protocol (NTP), which sync your computer’s clocks, allowing hackers to take control of a computer remotely. As the update was minor no problems that may affect your system or software is expected. If Apple is planning to release future security updates this way, will be there be any cause for concern?

The only problem that may occur is the risk of the update affecting other applications and processes on your Mac. If this is the case then you can disable automatic security updates by doing the following:

You will now be able to install updates manually and also see what vulnerabilities they fix. Let me know your views on the Apple Mac Update and should Apple continue with automatic security updates