Last week, I attended a talk on CyberPsychology by Mary Aiken in Trinity College. Mary is the world’s leading expert in CyberPsychology and also a producer and writer on the new hit TV series CSI Cyber, where the lead character is based on her. During her talk Mary mentioned how she felt social media is not being properly supervised with regards to how old the users are. The age limit for Facebook is 13 years of ages but you will find lots of children under 13 using it.

The visual below from Linneyville shows the social media minimum age requirements for most websites and apps. 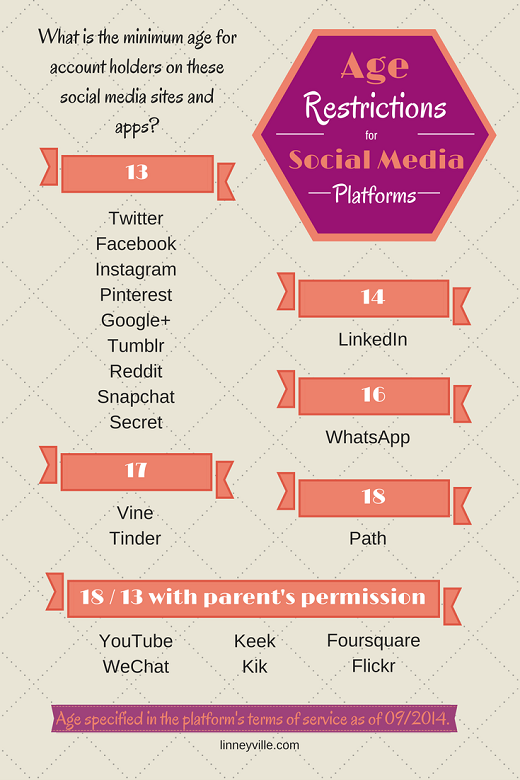 In a survey done in November 2013 by Irish anti-bullying service Bully 4U it found the following:

More information on the survey can be found here.

When children are using social media they are innocently posting up pictures of themselves and also their friends whilst also posting insights into their daily lives. By doing this they could be putting their lives at risk, as they will attract people that they don’t want to be near. There is also the possibility that somebody using a fake profile will be chatting to them and also becoming online friends with them.

Children have been told by their parents and teachers never to talk to strangers yet they openly do so online. A stranger is still a stranger if they are online or someone they might see on the street.

Education is the key to social media etiquette and usage and it is up to parents and teachers to do this. As computer classes are becoming part of the school curriculum, modules dealing with social media etiquette and how to go online safely should be introduced. Future generations should be protected and not have their innocence taken away from them.

Also is it time to introduce a worldwide common code of practice for social media and should the age limit be raised?