Information is the new currency and, as currency is controlled, information is destined to be too if governments have their way. Since the birth of the internet, it has been used as a medium to break stories and for people living under repressive regimes to tell the world what is happening. Last year I wrote about the sterling work Front Line Defenders are doing in providing tools that help activists and journalists living under repressive regimes to use uncensored Social Media. I mention this because in Ireland where Front Line Defenders is based and where I live, two new restrictive bills are being put forward by 2 members of one of our government parties.

Let’s examine Senator Higgin’s bill and see what it actually proposes. “An Act to protect against and mitigate harm caused to individuals by all or any digital communications and to provide such individuals with a means of redress for any such offending behaviour’s directed at them.”

However, section 4 of Part II of the draft Act gives cause for concern as it now stands. It purports to deal with the area of malicious electronic communication by providing as follows:

4. – (1) A person who, without lawful excuse, persistently shares malicious electronic communications regarding another shall be guilty of an offence.

(2) For the purposes of this section an electronic communication shall be considered malicious where it intentionally or recklessly causes alarm, distress or harm to the other.

(3) A person guilty of an offence under this section shall be liable on summary conviction to a fine not exceeding €5,000 or imprisonment for a term not exceeding 12 months or to both.

The definition of what is considered to be malicious under the Act is worryingly ambiguous. It includes an electronic communication that intentionally or recklessly causes alarm to the other. What exactly does that mean? What standard is to be applied to this? This wide-ranging definition is so imprecise that it could encompass robust discussions. It could be open to misuse by powerful people and or vested interests who simply regard it as a tool at their disposal to stifle debate, including anti-government rhetoric.

So as you can see the bill is somewhat draconian and while the stated purpose is to protect people online it goes much further than is required or necessary. There is a real danger that the provisions of the Act could be utilised to stifle free speech online. In short, it is open to abuse.

When it comes to Pat Rabbitte’s bill, let’s see what it proposes. “An Act to provide for certain offences in connection with the improper use of public electronic communications networks; and to provide for related matters.” He also claims “This Bill will make it an offence for a person to send, or cause to be sent, by means of a public electronic communications network a message or other matter that is grossly offensive or menacing in character.” The bill purports to deal with the problem of online stalking and harassment.

Halting online trolling is a good thing. However, there is a degree of ambiguity in some of the sections of the Bill. The Act makes it an offence for a person who for the purpose of causing annoyance, inconvenience or needless anxiety to another persistently and without reasonable cause makes use of a public electronic communications network. What constitutes annoyance or needless anxiety? What test it is to be applied here? Twitter only allows you to send a message with 140 characters in a tweet. For this reason alone a person might have to send multiple tweets in respect of one matter. Under this proposed bill would this be defined as persistent? If a person repeatedly voices a concern or an unpopular viewpoint or repeats facts that someone wants swept under the carpet could they be targeted under the provisions of the Act?

The bill also states the following “On convicting a person for an offence under subsection (1), the court may, in addition to any other penalty imposed for the offence, order any apparatus, equipment or other thing used in the course of committing the offence to be forfeited to the State.” So if your job requires you to have access to the internet via a computer, mobile phone or both, you can no longer do your job as your equipment has been taken from you.

What makes it more worrying is the announcement made by twitter late last month. Twitter announced they are moving all data from non-United States accounts to servers in Ireland, resulting in these accounts now being subject to Irish (European Union) privacy and protection laws rather than those of the US. This will have a huge impact on 77% of Twitter’s 288 million users, who do not reside in the United States. This will mean that a blogger or a journalist who is not based in Ireland will be subject to these new laws if they come into force.

George Orwell brilliantly put it when he said: 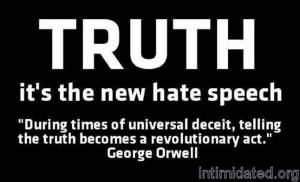 Do we want what is pictured below to become reality? 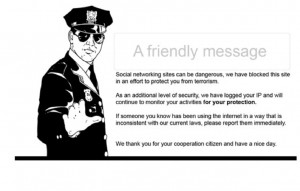